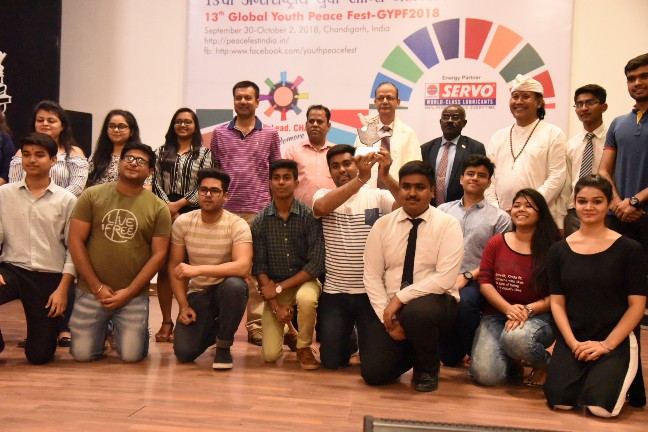 The 13th Global Youth Peace Festival came to a close here today on the occasion of the 149th birth anniversary of Mahatma Gandhi with a strong message of inclusion and leaving no one behind if we are to achieve the sustainable development goals by fostering partnerships among the youth.

On the occasion, an overbearing spirit of inclusion was witnessed between the school children of Chandigarh and other young people from the city who shared the same vision as the delegates to the 13th GYPF. This was amply reflected both in the camaraderie and the mindshare that was on display at the concluding ceremony. 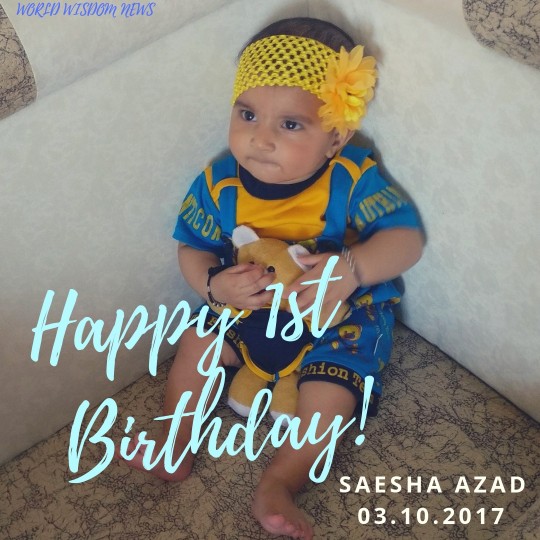 Four schools from Chandigarh were presented the peace awards for initiating a large number of activities through their peace clubs in the past few years. The Principals & a Vice Principal of these schools are – Reema Dewan of Delhi Public School, Sector 40C; Ramesh Kumar of Government Model Senior Secondary School, Dhanas; Sr. Mary Supreeta of Carmel Convent School, Sector 9B and Dr. Vibha Ray of DAV Sr. Secondary School (Lahore), Sector 8C – were honoured on stage by the traditional Phulkari Duptta and a Peace Award memento.

Before the award function, all schools presented the reports of the activities undertaken through peace clubs. The highlight was the presentation of Prerna, a visually challenged student from Government Model Senior Secondary School, Dhana, who got a standing ovation and a special award. This also set the stage for inclusion which was strongly suggested by the participants as a theme for the next GYPF2019.

In the morning, a ‘Walk for Wildlife Conservation’ was organised at Sukhna lake in which all delegates and 100 students from different schools of Chandigarh participated.  This was also a fitting way to remember Mahatma Gandhi on his 149th anniversary and celebrate start of Wildlife Week.

At the concluding ceremony, some of the delegates reflected on the deliberations and other activities over the past 48 hours. Majlinda from Albania said that we must live the themes of the fest and not just discuss about them. She particularly pointed out that she felt uncomfortable being stared at by men or by seeing rubbish strewn around the auditorium both which go against the lofty ideas discussed at the women’s rights and living in harmony with nature sessions. “Change must begin with oneself,” she said.

Priyanka, an Indian delegate said that the Fest must have more young people from India participating so that we are able to truly connect and appreciate the value of working together as one global family. She objected to use of the word foreign delegates and said we must drop the word foreign as we are all delegates.

A range of emotions and thoughts were expressed by the participants as they reflected on the past 48 hours. This included empathy and making bonds and friendships to getting new ideas and good for thought to implement sustainable development programs together.

Speaking at the concluding ceremony, Debendra Dalai, Chief Conservator of Forests, Chandigarh Administration said that it was heartening to see the young delegates coming together and talking about a whole range of issues including sustainability and wildlife conservation. He hoped that the bonds that the young people have established would continue beyond the festival.

Another highlight of the concluding function was a meditation session by Kuldip Singh of World Peace Initiative, who has been participated in several Peace Fest in the past. He introduced some easy tools for the delegates to practice mindfulness and calmness of the mind and said that balancing the outer and the inner personalities was critical to sustaining oneself and making progress.

Harsh Narayan, a filmmaker and creative director, spoke about his initiative of bringing youth from South Asia together through the medium of films and the creative arts. He said that he was organising a South Asian film festival in Delhi in November followed by another film festival in Karachi early next year. He invited all the delegates to come and attend the film festival.

The concluding ceremony was capped off by a cultural performance involving traditional Balinese Dance by students of Ashram Gandhi Puri, Indonesia.