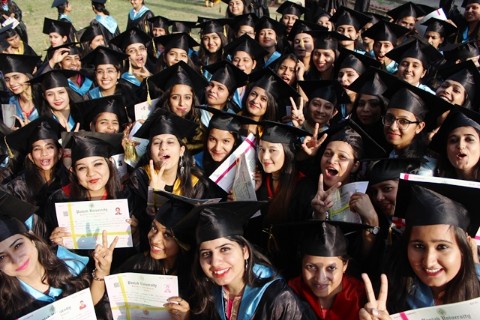 The 61st Annual Convocation of Post Graduate Government College for Girls, Sec-11, Chandigarh was held today. Prof. B. S. Ghuman, Vice Chancellor, Punjabi University, Patiala, was the Chief Guest on the occasion. The Convocation was inaugurated by lighting of the Ceremonial Lamp by the Chief Guest and Principal Prof. Anita Kaushal which was followed by rendition of Saraswati Vandana by the students.
Prof. Anita Kaushal, Principal of the College presented the College Annual Report and highlighted the illustrious achievements of the students in academics. Enlisting the glorious progress made during the last session, she highlighted that the college is synonymous with excellence. Enumerating the infrastructural developments she mentioned the installation of Water Boosting System for hostels; Skill development laboratory to offer vocational courses; and RFID system to make the library fully automated. She proudly stated that the institution has been ranked 68th in the country and stands first in the region as per NIRF-2018 Ranking; was adjudged 6th at the national level in Swatchta Ranking; and has been selected to be a co-partner with Government of India in the Unnat Bharat Abhiyan. Thus, it has carved a niche not only in the region but also in the country. 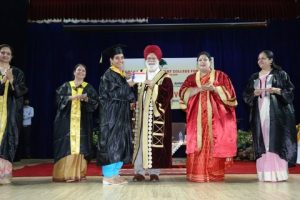 Congratulating the Graduates and Post-Graduates in his Convocation Address, Dr. Ghuman complemented them for being a part of the best institution of the region which has made its presence felt at the national and global level. He observed that modern age is the age of knowledge, and education has a deterministic role to play in the socio-economic development of the country. He emphasized that India should take advantage of its demographic dividend and focus of education should be on FOUR Es: EXPANSION, EQUITY, EXCELLENCE and EMPLOYABILITY. Reflecting his experience he stressed that Hard Work, Impeccable Integrity, Social Sensitivity and Living for others are the FOUR mantras of success. He wished the students a grand success in all walks of life.
More than 1000 Graduates and Post-Graduates were conferred degrees. 177 Post-Graduate degrees were awarded in Public Administration, Economics, Dance, Music Vocal, Music Instrumental, Sociology, English, Botany, Zoology, Chemistry, and Computer Applications. In the Graduate category, 189 for B.Com. and B.Com. Honours; 183 for B.A. Honours; 293 for B.A. Pass Course; and 243 Science graduates were conferred degrees in B.Sc. Medical, B.Sc. Non-Medical, B.Sc. Computer Science and BCA.
Students of the college who secured positions in the Panjab University Examination were felicitated on the occasion. 5 students who stood first in the Panjab University examinations were awarded Medals, and 9 were decorated with Roll of Honour by the Chief Guest for their outstanding academic performance. The recipients of Roll of Honour are: Anjali for M.A. Dance; Harpreet Kaur for M.A. Music Instrumental; Konica Sharma for M.A. Public Administration; Pooja, Jaskiran Kaur and Neeraj for M.Sc. Botany; Neha Rani for PGDCA; Archita and Diksha Sharma for B.Com.(Honours).
Ms. Harpreet was awarded Panna Lal Madan Medal for standing First in M.A. Music Instrumental. Ms. Gagandeep Kaur were awarded Panna Lal Madan Medal for standing First in M.A Music Vocal. Ms. Pallavi Goyal and Ms. Meenakshi were awarded scholarship instituted by Sunder Lal Ram Parsad Khosla Charitable Trust, for standing First and Second respectively in B.Com.

Chitkara University and ImaginXP collaborate to announce Master of Design in...