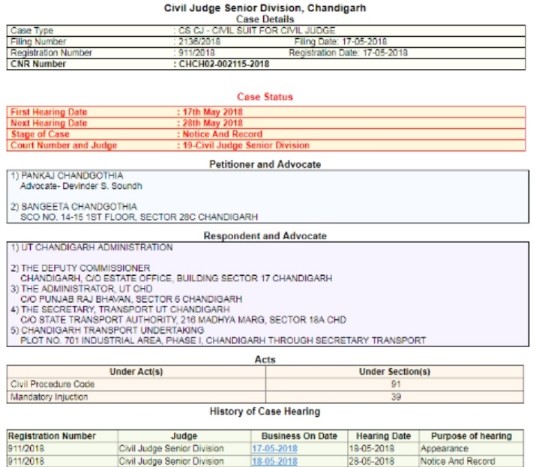 Earlier, the Pankaj & Sangeeta Chandgothia filed a case saying the plaintiffs are socially conscious citizens who are aware of the difficulties which the commuting public using Public Transport face. A good bus shelter is an important ingredient of a city’s mass transit system. An ideal shelter is one that allows visibility and easy access to the Bus, is comfortable and convenient, provides clear information and is safe.

The plaintiffs have been reading various newspaper reports over the past few months highlighting the state of Bus Shelters in the UT or rather their non-existence.

The petitioners alleged that, under the garb and excuse of modernisation, the defendants are delaying the design approvals and actual construction of Bus Shelters, on account of extraneous factors. The defendants do not realise the difficulties of the common man who has to bear the brunt of weather conditions and lie exposed to all sorts of inconveniences and illnesses and health hazards, in the absence of Bus Shelters. The defendants do not understand the difficulties of the commuting public because they themselves do not need to use the public transport system, as they are provided with expensive perks and frills in the form of chauffer-driven luxury cars. It is ironical that their salaries and perks are paid out of public money.